(The) Earth at Home

To celebrate this day, created with the aim of generating a common awareness for problems affecting our planet in different aspects, the Live Science Center of Lousal, in partnership with the Blue Ocean Foundation, invites you to participate, without leaving home, in a set of activities that we have prepared for you! 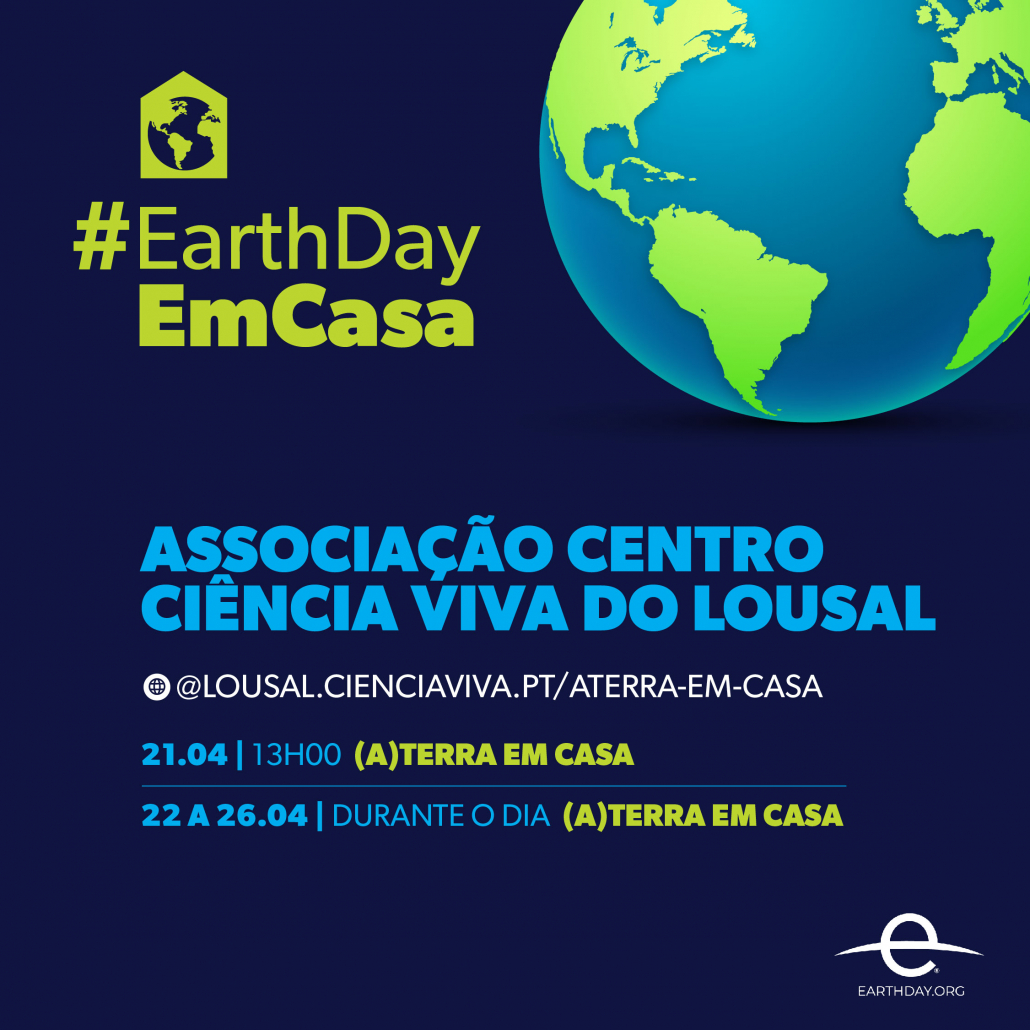 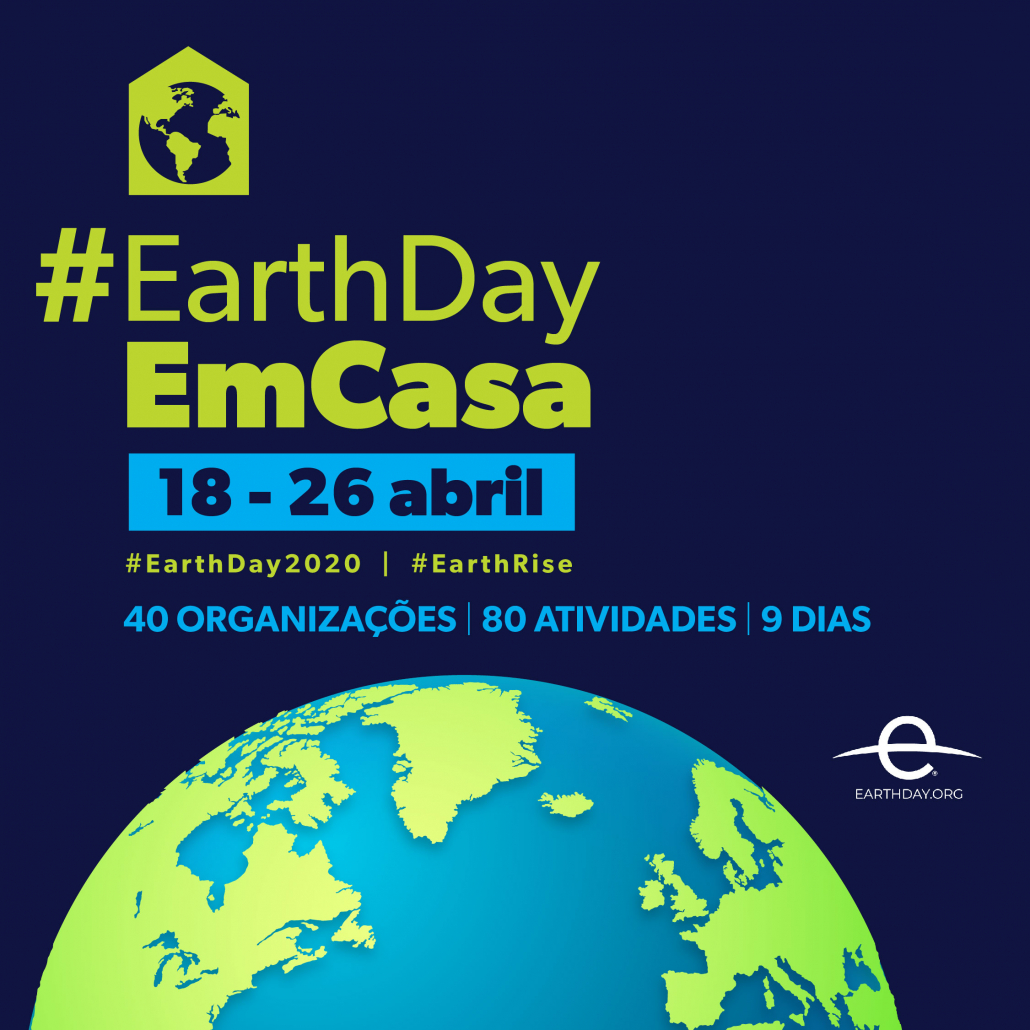 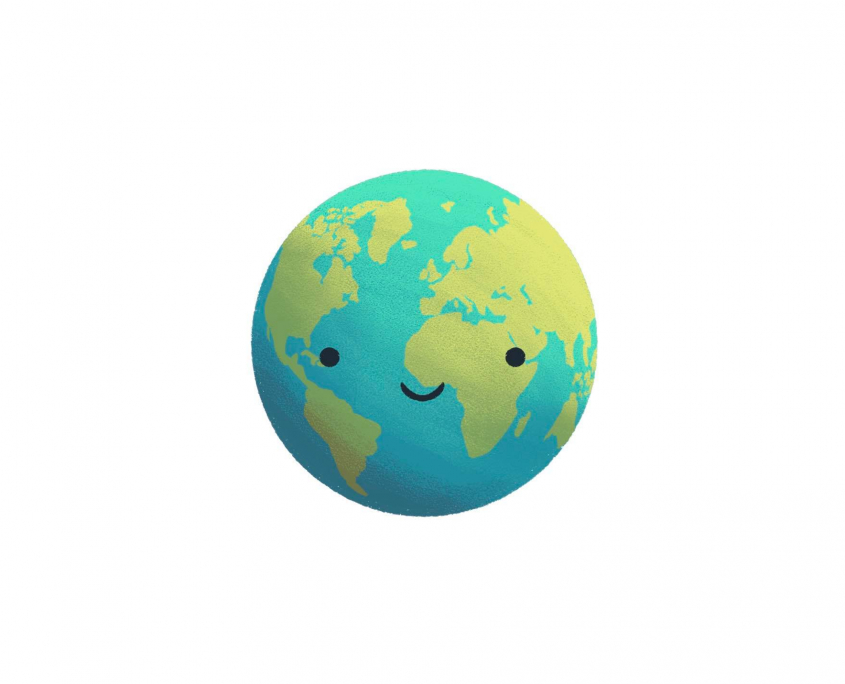 Download the 12 tips we present and photograph, with the smallest, places in the house where you can apply these Good Environmental Practices!

Share photos of moments of interaction with planet Earth (landscapes, fauna, flora…), or photos of how you see it through the window of your home.
We will release all the photos here! The most original will be published on our Instagram!

Assess your knowledge of causes, consequences and mitigation of climate change!

We recall an initiative of the year 2016, as part of the celebrations of World Earth Day.

There are many aspects that lead us to the beauty and splendor of our planet. The Earth presents us with idyllic and breathtaking landscapes, however, there is a huge variety of species that often only get to know each other after being filtered by an objective.

In 2016, the Wolf, the Iberian Wolf, the Grizzly Bear, the Glutton, the Eurasian Lynx and the Iberian Lynx entered through the gates of the Science Mine to teach us to “Coexist with the Great Carnivores”, a temporary exhibition that marked the celebrations of World Earth Day.
The inauguration of the exhibition was marked by the presence of biologist Isabel Ambrosio, Grupo Lobo, in a session dedicated to aspects of the preservation of the species Canis lupus and Canis lupus signatus and the role of the Lobo Group in the preservation of these species. 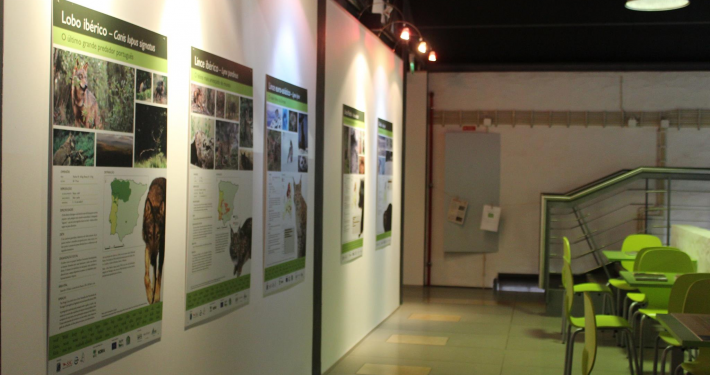 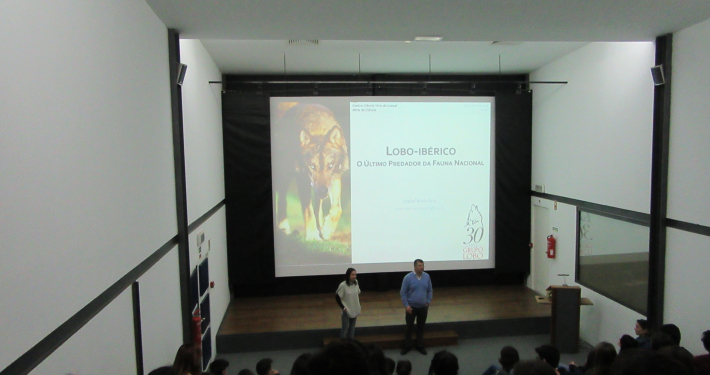 Associated with the celebrations of World Earth Day, this week’s “Plant Yourself” shows some plants that can function as important bioindicators of certain abitotic and biotic characteristics, reflecting the environmental conditions of the places where they occur, namely their physical and chemical properties. Climate, soil and water are key.

The majority of plants have great ecological tolerance, and can occur in a wide spectrum of ecosystems and environmental conditions. However, there are others, who have adapted to certain biotopes or specific edaphic and climatic conditions, to which they are quite faithful, or, to extreme ecological situations, where many plants do not survive. They may be highly tolerant of adverse environmental conditions or prefer habitats that are unfavourable to most plant species, including environmental contamination situations, thus denoting their high expertise and bioindication potential.

This is the case of some species of the genus Rumex, which naturally occur in acidic soils, usually poor in exchange bases and with high levels of manganese, aluminum or iron, which make these substrates toxic to most plants. These species thus have an important bioindicator role of these environmental characteristics. This week, on “Plant Yourself Want!” we have rumex acetosella subsp. angiocarpus (Murb.) Murb., an abundant species in the mining village of Lousal, rich in pyrite (iron sulphide, FeS2), whose presence reflects precisely this situation! 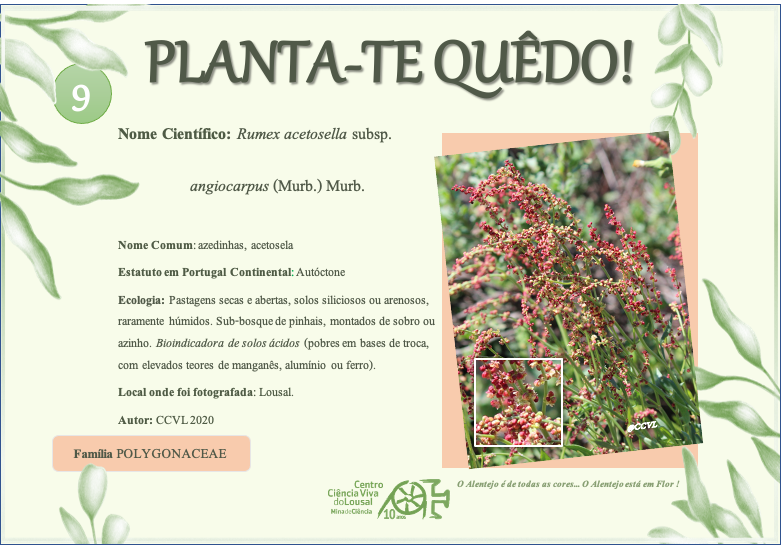 Many plants of the genus Ranunculus only live in aquatic environments or in saturated soils. Called aquatic hydrophytes or macrophytes, due to their adaptation and fidelity to these habitats, they play important functions in ecosystems, highlighting the absorption capacity of certain nutrients and pollutants, naturally toxic to other plants. They are thus reliable bioindicators of water quality. The case of Ranunculus peltatus Schrank is no exception, occurring in quantity in a small lagoon, known as Tapada, in the former mining village of Lousal. Its presence indicates the pH tendentially acidic of the waters of the region, due to contamination by metals such as iron, and, the low trophic availability (oligotrophy), associated with aquatic media with these characteristics! 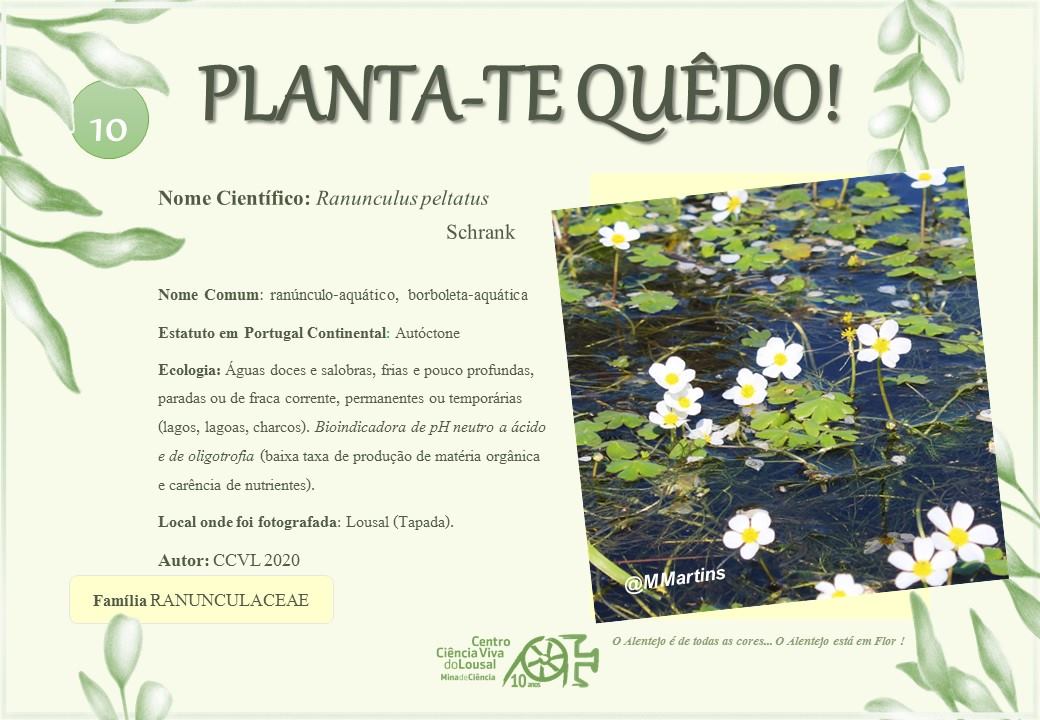 Biotopes with extreme environmental conditions, such as beaches and coastal dunes, suffer a high environmental stress, and biological adaptations of plants are dictated by environmental factors. The proximity to the sea, the influence of salted marine spray, the psophile susbtrato (from mobile to semi-fixed sands), and climatic factors such as temperature and geomorphology, determine a high specialization and fidelity of plants. When the balance between erosion and accretion in the sandy coasts is balanced, the plant communities are distributed in well-defined bands and with clear transitions, which are succeeded according to the sea clearance. Thus, there are plants characteristic of the high beach, embryonic dunes, primary dunes, interdunares corridors, secondary dunes and finally, tertiary dunes, which usually exist only in this type of habitats (likewise, only these plants occur in these places, usually being the presence of more conspicuous species, caused by a disturbance, usually of anthropic origin).

In geomorphological terms, the closer to the sea, the more mobile the sands will be, gradually decreasing inland. However, in situations of erosion of the beaches and advance of the sea, the sands of the beach and the primary dune tend to recede, and with them, some of the plants characteristic of these sectors, whose biological specificities allow it, since they are colonizing plants, adapted to the mobility and instability of the substrate and with tolerance to burial. Since the reaction capacity of plants in the less mobile interior sectors is lower due to their biological types, the species from the sectors near the sea end up overlapping and mixing with them. Thus, plants characteristic of the high beach and primary dunes, when found in more indented sectors of the coastal dunes and mixed with the typical vegetation of these sectors, constitute very reliable bioindicators of coastal erosion.

This is the case of polygonum maritimum L., which we present this week, photographed at São Torpes Beach (Sines), whose sand has been gradually decreasing for some years, causing in some places, the vegetation of various sectors, is currently constrained and mixed in a small area! 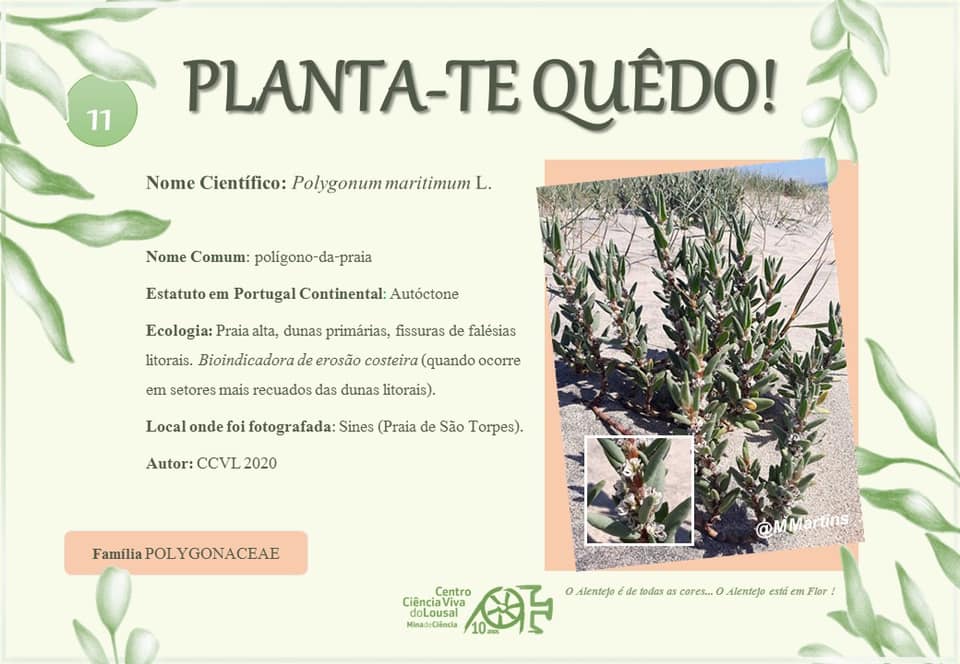 COVID-19 IN THE LIGHT OF SCIENCE

Because we are celebrating World Earth Day, we invite you to analyze the consequences of the pandemic “in the perspective” of our Planet Earth.

The streets, cities and countries have slowed to an unprecedented pace in the modern era. This collection of people in their homes has installed silence and calm in such a way that we now feel and hear the Planet in a peculiar way.

João Duarte, professor and researcher at the University of Lisbon, in the area of Marine and Tectonic Geology, commented to us an article published in the journal Nature – “Coronavirus lockdowns have changed the way Earth moves”- on how the decrease in social metabolism in large cities, associated with containment measures adopted to combat the outbreak of the SARS-cov-2 virus, has altered the dynamics of the planet Earth itself.

You can download the original article and its translation here 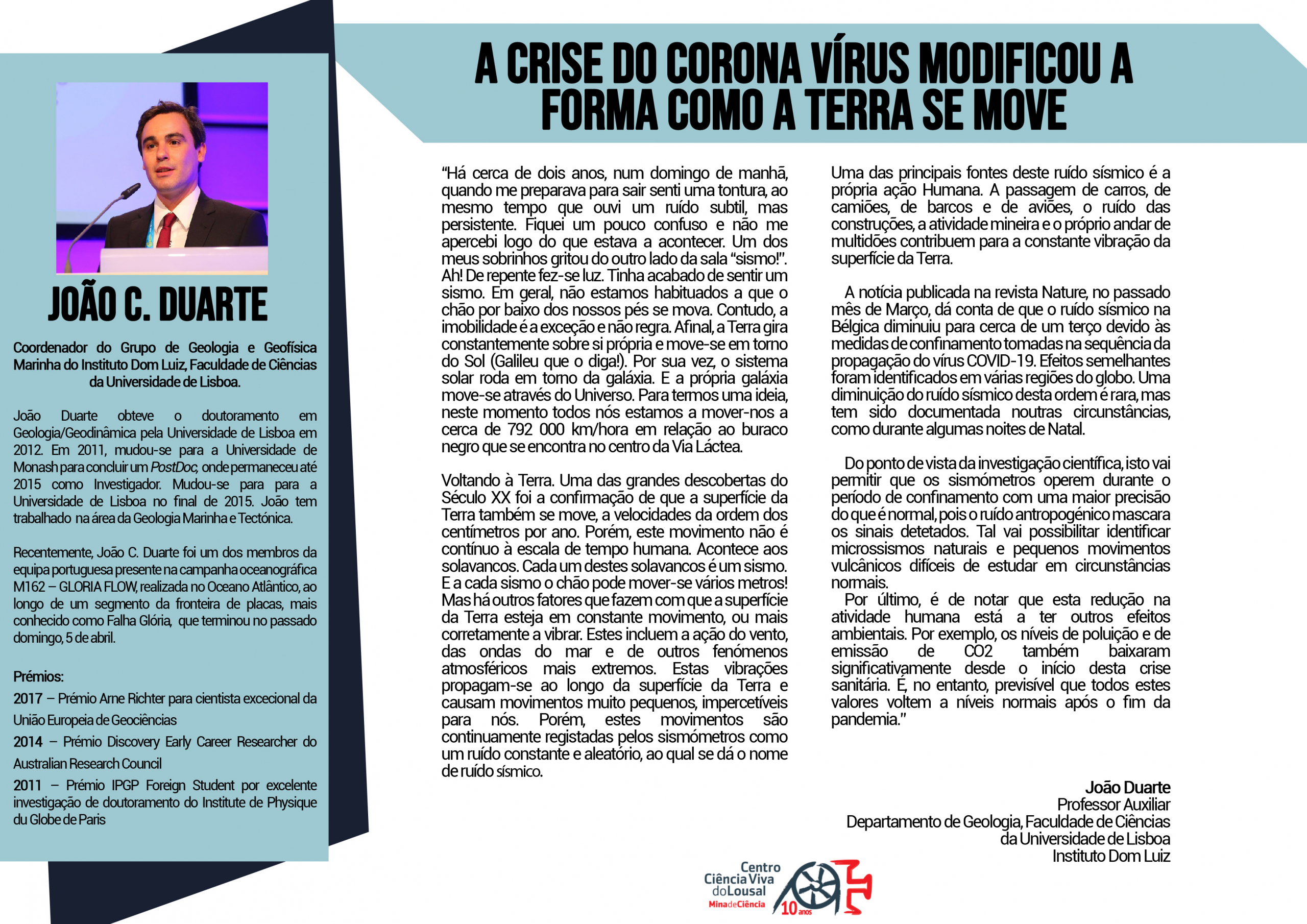 As part of the World Earth Day

commemorations this weekend we suggest viewing two documentaries focused on climate change and how they are affecting our Planet:

ICE on FIRE (2019)
Throughout this documentary, produced and narrated by actor and environmental activist Leonardo DiCaprio, alternatives are explored aimed at reducing carbon emissions into the atmosphere. The documentary also focuses on a problem of increasing complexity, related to the release of methane in the Arctic, a powerful greenhouse gas whose increasing concentration in the atmosphere due to human action may be responsible for devastating consequences for the planet. More than a mere account or description of known environmental facts, the documentary is a call to global consciousness and a request, on behalf of planet Earth, for a joint solution to the current climate crisis.
Before the Flood (2016)
With national geographic’s seal and the making of Fisher Stevens, this documentary invites you around the world on a journey of reflection on the impact of climate change on the environment. From the means of transport, to the way we obtain our food, through the building of cities and the construction of our society, discover what is within our reach to do to prevent the disappearance of endangered species, ecosystems and native communities throughout the planet.
It’s up to us to take care of Planet Earth, our ultimate House!
Ice on Fire: https://hboportugal.com/filmes/ice-on-fire (Not Free)
Before the Flood: https://www.youtube.com/watch?v=mRMu07sn88g (Free) 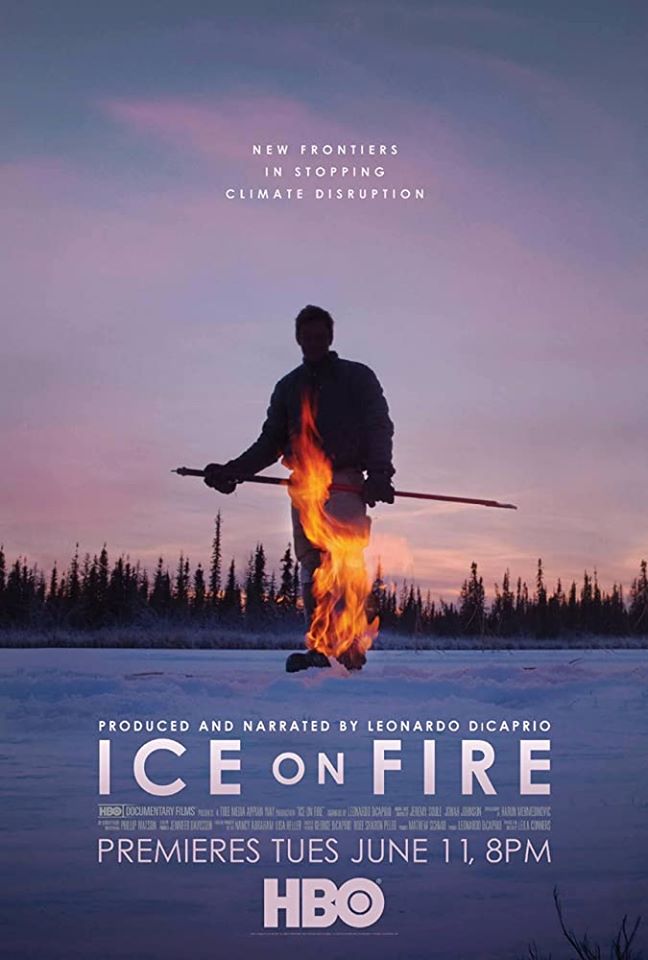 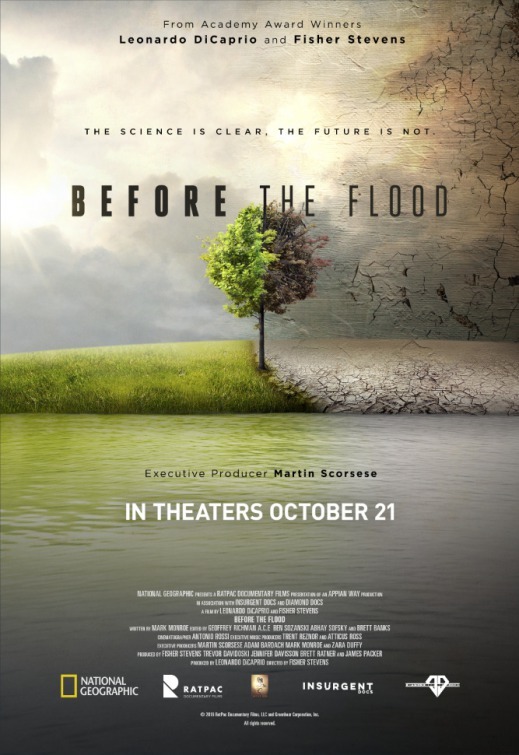